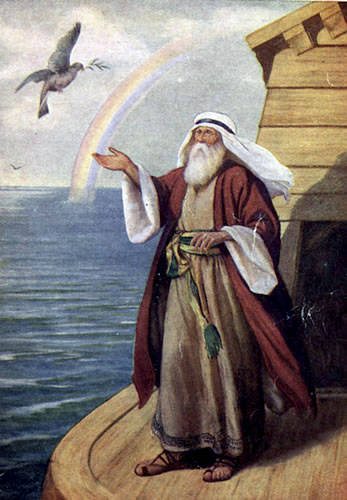 Noah with dove returning after being released. The dove returns with an olive leaf.

Doves have been used throughout history as a symbol of love and peace. Noah’s hope and faith soared when a dove brought to him proof of a glorious future in the form of a simple olive branch.

In ancient Greek and Roman times, doves were worshiped and considered sacred. In modern times, doves have been used in Olympic ceremonies to symbolize the hope and peace throughout the world. Doves were even used by Walt Disney at the Grand Opening celebration of Disneyland in 1955 and again at the 50th Anniversary of the opening.

The preferred type of release doves are white homing pigeons. They are members of the Rock Dove family. Homing pigeons are preferable to ring neck doves due to their inate ability to find their way home from hundreds of miles away with speeds of up to 60 mph. White ring neck doves do not share that same ability and if released into the wild may not survive.

Our birds are thoroughly trained to give you the most enthusiastic exceptional performance.